I'm on call this weekend, the weather sucks and my thermion XG50 is at pulsar getting a checkup, so yesterday I decided to dive right into seeing if I could remove the barrel extension, so I can rebarrel my rifle with a lightweight CF barrel.
After removing the .243 barrel with the extension, I took measurement notes, then used a heat gun to soften the sealant.
The barrel nut isn't the same as the standard Savage small shank nut, so the usual two sized barrel nut wrench won't fit.
I used a large pair of channel locks to remove the nut, as I'm not reusing it.
Put the barrel in the viper barrel vise and backed up the extension with a strap wrench, but the extension was to slick and I couldn't get a bite to hold it.
I didn't want to mar up the extension, so I secured the extension in the vise and the nut came free very easily, unlike some of the past barrel removals I've done.
The factory impulse barrel has the same dimensions as any commercial made savage small shank barrel and the 26" criterion match barrel fit into the extension with no issues.
The Extension and recoil lug are keyed, so no dealing with the hassle of trying to line up the parts when tightening it up.
I set the .260 barrel to the same depth measurement into the extension as the factory barrel, but headspace was to loose.
I had to turn it in a couple thousandth's more to get it right.
Another note, the scotch tape method to headspace was too loose when I checked headspace on the factory barrel.
I had to use blue painters masking tape to make it "No Go", so that's what I used to headspace the .260 barrel.
Tested function with some dummy rounds and it cycles + feeds from the AICS magazine without issue.
Popped some primers and now I need to mount an optic and see how it shoots.
Once I get some barrel extensions made, switching barrels will be a breeze.
Being this is a short action with a standard .308 bolt face, I'm limited in caliber choice, as Savage won't sell parts for the rifle and there's no aftermarket parts available I know of.
Just waiting on the arrival of the .243 chambered 20" CF X barrel and then I think that'll make it the perfect walking varmint rifle, which is my intended goal.
More to follow. 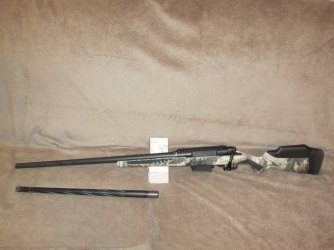 Do I understand this correctly? You switched from a 6 creedmoor to a 6.5 creedmoor?

JamieZ said:
Do I understand this correctly? You switched from a 6 creedmoor to a 6.5 creedmoor?
Click to expand...