NYGF If you use Chrome browser on a laptop/desktop, the site logos have probably been messed up for a long time and should now be fixed.

This probably isn't really a thing that an 'announcement' needs to be made about, but I'm just so damn pleased about it.

Aaaaall the way back in November I found out that there was an issue where the site logo , specifically only on desktop (non-mobile) Chrome browser, was sometimes being displayed as tiny and basically unreadable. I also found out that the problem had been going on for longer than that, because I don't use Chrome browser personally and hadn't seen it. @NYGuns had told me about it at some point earlier, but there was a little miscommunication and I'd misunderstood what he meant.
In any case, both of us I think understood it was almost certainly a bug in the 'Theme' (essentially the visual skin that you see instead of the base Xenforo software look), but neither of us knew where the problem was and/or how to fix it.

So, this led to me pouring through code, for some length of session, far more hours than I'd like to think about, every few weeks wanting to pound my head on the desk until every time eventually giving up. I scoured the internet, time and time again, asked questions where I could, and no one else seemed to have ever had this problem. It was driving me nuts.

Which brings us to now. Finally.. finally.. I didn't exactly 'fix' it, but I managed a workaround of sorts. So, again, you guys probably don't care about this and it probably didn't need an announcement.. but damn it I conquered the bug. And so, people who use Chrome on desktops/laptops will actually have the site displayed properly, and will get to see.. well , the logo , but also all of our nice holiday logos and the random ones I sometimes put out for a day. Hey, a win is a win.

TLDR: If you used Chrome on Desktop/Laptops, all site logos were terribly messed up and now they are fixed (after a long struggle and madness on my part). 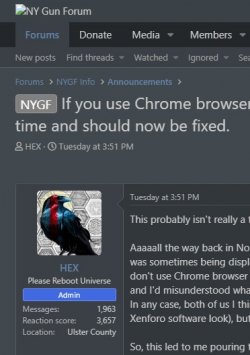 Not to burst your bubble, but this is how my logo displays on a desktop using Chrome v. 103.0.5060.114, with color mode Basic Dark. The other color modes do appear correctly, however, so thank you for your work!

omfgrub said:
Not to burst your bubble, but this is how my logo displays on a desktop using Chrome v. 103.0.5060.114, with color mode Basic Dark. The other color modes do appear correctly, however, so thank you for your work!
Click to expand...

Ah.. well, burst bubble or no, I'm glad you mentioned that. There's a good reason it looks like that, and that's simply because I wasn't putting logos on it or doing anything with the Basic Dark theme at all... because I was under the impression that it wasn't available anymore. So it would look like that on any browser.
This might have been another thing @NYGuns and I had crossed wires on, or it might be a complete oversight by us both (stuff happens, we're not perfect).
Either way, I believed until just now that users only had available the two that are switched between with the light-bulb icon thing.

It may seem strange that I wouldn't have known, but perhaps more understandable when I tell you that when I click on the 'style picker', as an Admin account, I see 22 choices ; which includes every old variant and a bunch of 'test' looks that were never used publicly. I have to log into a 'testing stuff' account that doesn't have admin access to see the site as everyone but site staff sees it.

So, for now I've put logos on the Basic Dark theme , but most likely that option will get dropped entirely because it isn't up to date with our current tech and version of xenforo.

In any case, I appreciate the heads up @omfgrub .

Similar for Brave on IOS

fnfalguy said:
Similar for Brave on IOS
Click to expand...

Hmm.. Oh boy.. well, that's a whole new problem to look into. Thanks for the heads up.

I thought something changed a few days ago... logo is now bigger for me -

MikeyCNY said:
I thought something changed a few days ago... logo is now bigger for me -

Yep, that's what it should look like on Desktop/Laptop computers. Before this fix Chrome was 'squishing' it way down.

HEX said:
Yep, that's what it should look like on Desktop/Laptop computers. Before this fix Chrome was 'squishing' it way down.
Click to expand...