Interesting... direct competitor to Beretta 1301, which was on my "to buy" list this year.. but this comes pre-milled for micro red dot.

Yeah, I saw this yesterday and now I feel the want for a new shotgun.

I thought about one last year but went with the 1301 comp. I havent fired one round threw it yet.

I had a 930, and it needed alot of tweeks to be more reliable than it was. Still wasnt reliable enough for me so i went and spent the extra money on a benelli. I love the mossy 500, but not a fan of the autos. Ill have to watch this though to see how they improved over the 930.

I have 1301 comp with the 21” barrel. I love it. Never any problems. It has very aggressive checkering on the stock. I changed the stock so it has more of a A2 with pistol grip 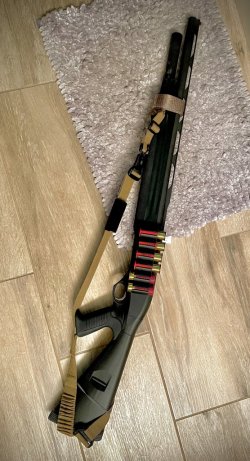 Optics ready! LMAO! yeah so is mine.. Has a Pic rail on it.

Watched the vid, sounds like they made some good improvements but only time will tell.

I have/had multiple Beretta 1200's and 1201's; they are light, fast, and utterly reliable.....I'm pretty sure you can make the last empty clear the receiver before the first hits the ground. The Beretta's were made by Benelli and later Beretta bought up Benelli along with several other Manufacturers. Many of the Turkish Shotguns (sold/imported under multiple names) are damn close to being identical to the Benelli Inertia Drive and some of the gas-driven designs, but lack the fit and finish associated with the Italian Guns.

Borrowed a Winchester Super-X and I believe it was faster, certainly less recoil.