Yesterday I went to the LGS to pick up my order, on the used rack was a very good looking Remington Mohawk 10C, 22LR rifle, it came with multiple mags. It was part of a estate clean out. the owner sold it to me dirt cheap, so it came home with me.

I downloaded a manual and a few articles, so now is time for me to read up on a rifle, that was made within 50 miles from where I grew up. It too late to ask my uncles, who worked for Remington, for 40 yrs, as both of them passed away 20 yrs ago. 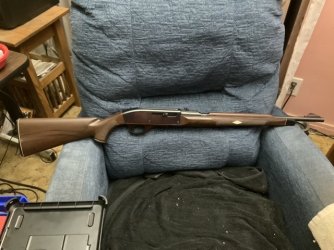 If I remember right they also made a bolt action rifle very similar.
H

Curious what it cost. I bought 2 brown nylon 66,s a few years ago. They were purchased new in 1989 and still in box with a Tasco 4 power scope. I paid a grand for the pair.I was happy!

Shadow rider said:
If I remember right they also made a bolt action rifle very similar.
Click to expand...

yes,that looks like a model 76 trail rider.I got one that I had problems with and gunsmith years ago said they were a nighmare and I never did get it fixed.These things bring pretty good money IF they work.

Good deal,I,m glad for ya.

They were a neat, sort of sexy little Rifle, but they have a sad downside: The synthetics they were made of becomes brittle over time, so avoid any cleaners that strip away Oils (brake cleaner, carb cleaner, acetone, etc.) Magazines are or were available for models using one, they do not lend themselves to be easily disassembled, so unless you're adept or there's a real problem I suggest not tearing into them.
The do shoot nice, they were also Built/Engineered for "Standard Velocity" ammunition, and using "High Speed" often gives older (pre 1970's) Semi-autos problems, so do the rifle a favor and stick with SV ammo.
I don't know how many they made, but they came in Brown, Green, and Black.....Tube fed, and Magazine fed, semi-auto or Lever, some are stupid expensive and others are just expensive.

Nice little rifle. You must haunt Tim’s place over your way.