Just got my Impulse fluted barrel back, duracoated it with three coats of matte black and two coats of matte clear.
It weighs 11 pounds topped with the Thermion XP38 and a loaded five round steel AI magazine, the way I carry it in the field.
Bipod is on just for pics.
It's still a little barrel heavy, but I think it looks a lot better.
Those flutes should guarantee me at least three more coyote this season !
Now it's time to hit the range and see how close to zero it will shoot after all that's been done to it.
Upgrading to a Thermion XG50 this year, but haven't received it yet.
Was hoping to sight it in after checking zero with the XP38. 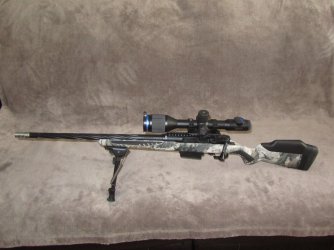 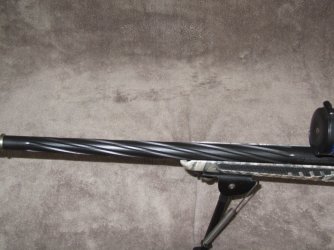 That looks amazing. Love the barrel.

Post a video at a couple different known distances when you get the XG.

I'm keeping my XP, just in case the XG doesn't live up to the hype.
As you know, you get what you pay for and I'm told that the XG is the shit.
Here's a pic of the first shot on target at 100 yards, after the rifle was disassembled, barrel fluted, coated, cleaned thoroughly and reassembled.
3-1/2 inches low and 1" to the right. 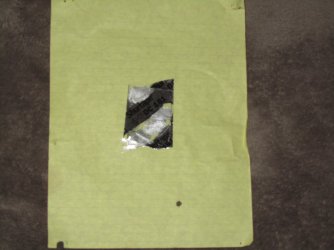 Did you get the new toy yet? Patiently waiting to see video side by side,,,, even know,, I know video doesn't show actual clarity.

15 or so more days till all hell breaks loose !!

There was a snafu with shipping the XG, but it should be here later this week according to tracking.
I got it sighted in with the XP for now, so it's ready to kill.
I'm also waiting for the lapua 77 grn OT projos to arrive.
Was told their a bit more accurate and deadly than the Noslers I'm using now.
New scope, new projo's and a newish rifle for the 2021 fall season.
You must log in or register to reply here.
Share:
Facebook Twitter Reddit Pinterest Tumblr WhatsApp Email Share Link
Top