For quite a while, I’ve had a Henry AR-7, but I’m hardly impressed by it, it works and I find it pretty so-so. Last week I ordered a Tactual Solutions Owyhee (Oh-Wah-Hee) bolt action 22LR takedown rifle. It uses a Ruger BX-1 rotary mag, a threaded aluminum barrel with a steel liner, a modified Magpul aftermarket, Ruger 10/22 takedown stock, that weighs a little less than 4#. It arrived on Monday.

While there pick it up, I found they had a used Marlin Papoose takedown, with the original bag, manual and barrel wrench. It end up coming home also. the rear sight on the Papoose, was broken, so I installed a Skinner peep sight. It was extremely dirty, the bolt barely moved. After about an hour or two, of rigorous cleaning, buffing and scraping, I got where the bolt glides smoothly and all other parts were cleaned and lubed.

The Owyhee is great, the build quality is first rate, the bolt is smooth, the barrel locks with zero wiggle and the trigger is very acceptable. The sights for me were a disappointment. $10 sights on a $900 rifles, I suppose if they had to chince somewhere, that was the proper place, I installed a new set of sights.

Monday night and Tuesday morning I took both rifles to the range gave them a workout. The Papoose is a very nice rifle, the accuracy while not stellar, is more than acceptable for me. The Owyhee is excellent, smooth, lightweight, very accurate, it is far above what I hoped for. 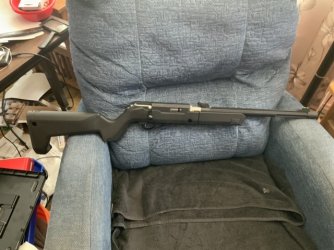 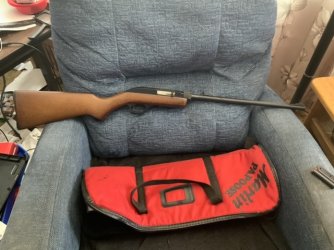 Nice pick-up! That Marlin Papoose looks to be the take-down version of my 898 M2 which my dad gave me when I was 14, still have it and it still a good shooter. I do have the original rear sight and 2 factory ( I believe ) 7rd mags. I did pick-up a few new Marlin 10rd mags that did work with mine. I sure you are aware of this site as a great source of info on anything rimfire. RimfireCentral.com - Rimfire Community!

I’m a member over there