Crazy to see.. amazing recovery for him these past 10 months.

I half-expected him to cut himself on the "ears" while extracting the brass during the SLAP round trial.

Acer-m14 said:
what would happen if you loaded a 50cal with FFFFg full case ??
Click to expand...

Honestly, my guess would be that it would go off fine and you would get low velocity out of it. Black powder needs a full case or some slight compression to function properly, and I would guess that even FFFFg isn't going to cause anywhere near the pressure of a correct smokeless charge. That said, I'd be willing to bet someone else's gun on it, not my own or life and limb.

ArmedCorgi said:
I see. I wouldn't buy ammo for a 50 bmg that was someone elses hand loads or some unknown manufacturer. I wouldn't for any caliber for this exact reason.
Click to expand...

I got some .44 Magnums from a guy trying to give them to a local store for disposal. They were all corroded and the store didn't want them. He assured me they weren't handloads and that he had bought them, but no longer has a .44 mag. Inspecting them at home, they were several different headstamps with what appeared to be all the same bullets. Suspect. Maybe remanufactured ammo. Either way, I decided there's no way I'm shooting them and instead I'll pull them for components. It's just not worth it to mess around when you're containing a small explosion right next to your face and hands.

I’ll take the bipod and the monopod

I suspect PETN in that recipe. Looks like more than 190k

No info on this one. Although looks more like a squib type wreck. 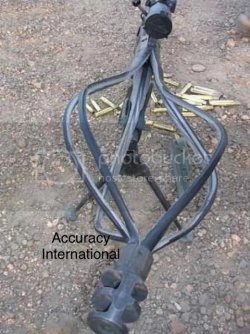 FRANKIE said:
No info on this one. Although looks more like a squib type wreck.

If KB is now into blowing up guns .. he should hook up with Matt from DemoRanch lol

In a full case of PETN alone? Sure it would if your primer would happen to be a blasting cap
Lol..

Acer-m14 said:
If KB is now into blowing up guns .. he should hook up with Matt from DemoRanch lol