The Primary Arms Compact Weapon Light GENIV (CWL) is an aluminum bodied light measuring about 5.75in long and 1.25in at its widest point. Supplying 800 lumens of white light, the layout is of the familiar tubular style with the lamp on one end and a generously sized tail switch on the other. It runs on two CR123A 3V lithium cells loaded in line through the tail cap. This test example sports an anodized FDE finish.


While not scientific in nature, I conducted the following forms of “daily” life testing. I tested this light in two different roles, one as a dedicated weapon light, and as a standalone duty light. I also conducted some “hard use” tests which are not very practical but demonstrative of the attributes of this light.


In a defensive scenario I am a proponent of intermediate caliber rifles and handguns. The limitations (and payload flexibility) of shotguns as combative tools is beyond the scope of this review. However it should be noted that this light is “shotgun” rated by the manufacturer. As the “Compact” Weapon Light is easily over 5 ½ inches in length I mounted the light on my NY legal rifle. This rifle is an ARish type platform with an 18in free floated barrel and a Bravo Company Machine upper receiver mated to a Fight Lite Industries SCR lower. Optic is the outstanding Primary Arms 1x6 ACSS scope. If you haven’t seen the SCR yet , it has a mini 14/AR frankenstein shade to it but with a streamlined look and a deceptive “I’m just for hunting.” swagger to keep those with an totalitarian bent from wetting themselves.


The CWL was mounted to this rifle using the Safariland RLS mount. I like this mount for my “hunting” rifle as it can easily be removed in an instant by hand for deer season then snapped back on after dark for defensive purposes. The mount and the light tube are both designed as 1 in in diameter and the set up fit well.


Here in New York, April 1st marks the end of the coyote season. I used this rifle with the CWL mounted exclusively for coyotes this year. It stood up to the cold and wet without a hitch. I particularly liked the switch which is recessed into the tailcap to a degree that makes it difficult for an inadvertent discharge of the light while crawling through brush, but still easily activated with a heavily winter glove. Hold and release for momentary on, push to click for constant on. The beam is rated for a 200 yard throw, but I found it was easy to identify whether it was a coon, possum, or coyote at distances beyond 200 yards. The beam shows up as a wide cone at this distance. Closer to 100 yards you can make out a discernible center beam and outside “halo”. Even at closer ranges this outside “halo” is wide enough to light up quite a bit of space, while the inner beam acts as a good indexing point when mounting the rifle and bringing it directly up on target.

On the range the CWL held up like expected. The light never flickered once in constant on mode and momentary use was flawless. It should be noted that the SCR is in 5.56mm so subjectively there really isn’t enough recoil there to stress the battery contacts. I fired a total of 1000 rounds through this rifle between hunting and drilling at the range while the CWL was mounted.


I used this light while on duty as a handheld, working both in the street and inside a maximum security correctional institution. I carried the CWL in two ways, one in a light sheath mounted on my duty belt, and simply shoved in my front pocket. For anyone who has used lights with similar body styles the icepick grip works just as well for this light, despite the recessed switch. In fact, I have had other lights with more pronounced switches activate inadvertently while in my pocket. I really like the design of this tail cap. The body of the light began to show a little wear of the anodizing, but this is to be expected with all the constant rubbing that the light would get after a couple months of constant use in my position. As for brightness, I could not find an alley, corridor, or any interior of a structure that this light did not illuminate well. While I had no occasion to find out, I’m sure this light has ample brightness to interrupt an assault.


To test the temperature tolerances of this light, I let it sit in temperatures of -5 degrees F for 24 hours and 200 degrees F for 5 hours. The light remained functional and I did not notice any damage outside of the rubber of the tailcap slightly deforming. After noticing this deformation I decided to place the light in a water filled 5 gallon bucket and activate the switch 10 times. I then left the CWL running at the bottom of the bucket overnight.


I was pleased to find the light still running when I retrieved it from the water. Upon removing the tailcap I could not identify any evidence of water intrusion either through the switch or past the o ring of the battery compartment. The batteries remained dry and uncorroded. Both the rubber switch and o ring had stood up to the heat and kept the water out. Tuning the light over, I did notice a very small amount of condensation on the inside of the lens. There doesn't seem to be any reduction in the performance of the light. I promptly cleaned up the CWL and re-mounted the light on my rifle.


The Primary Arms Compact Weapon Light GENIV is a great light for the price from a great company who has a pattern of presenting quality products at a good price point. A proprietary tape switch can be purchased from Primary Arms if that is how you prefer to activate the light when mounted on your firearm. My only major hang up with the light is that the CWL is not compatible with many of the light/laser control units out there such as the Unity Tactical TAPS. Most of the control units out there use Surefire and/or Insight leads which by default have become pretty much industry standard. If the CWL could be integrated with one of these units and paired with an IR laser/Illuminator this light could find its way onto my go-to rifle. Perhaps in time. In any event, for 70 bucks you can’t go wrong with this high quality light. 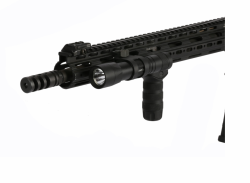