Darwinism....Make sure its dead 1st!! (Graphic) 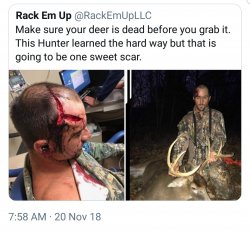 Nice tale to tell for that scar.

When my oldest brother was stationed up in Fort greely Alaska one of his superiors shot s huge moose.he lifted its head and put his rifle in the antlers for a picture, the moose got up and took off. Never to be seen again.

Some where up in Alaska says a rifle & scope that by now is a useless piece of rotted wood and rusted steel.

That could've been a lot worse. Lucky he didnt lose an eye or two.

The deer went down fighting.

"sometimes you get the deer
and sometimes the deer gets you!"

With a gash like that in his head,he still posed for the pic.One tough bastard,eh?

stokes said:
With a gash like that in his head,he still posed for the pic.One tough bastard,eh?
Click to expand...

Massive blood loss can make you do stupid things.

Looks pretty dazed and confused to me...

must have been using 9MM

GOYABEAN said:
must have been using 9MM
Click to expand...

Back in the late 70's,some guys I worked with went hunting,upstate.Very inexperienced hunters from Harlem,3 of them in a Caddy,El Dorado, one of them shot a bear,but it was the day before bear opened,back then bear opened later than deer.In a panic,they hurriedly put the bear in the back seat and wrapped it in a tarp and down the road they went.Yep,bear woke up about a couple miles down the road.Stopped the car and all ran out,closing the doors behind them.Bear tore that Caddy to shit until one of them got up the balls to go open the door.Lucky bastards,worst "injury" any of them got was Curtis shitting himself on the way out of the car.

Not the brightest crayon in the box.

Oops. I guess he didn’t do the stick in the eye trick.

Deer said, "catch me outside".

I was hunting with my ex MIL probably 20yrs ago, she shot an 8pt in the head. Walked up to it all excited and yelled to us she got one. She picked it up by the rack that was still fully attached, checked it over and layed it back down. She turned around to see how far away we were and we watched it get back up and run across the field

Must have knocked it out when the slug split it's skull. She ended up hitting it in the chest when she realized it was off to the races lmao.

oooh how could you shoot a poor defenseless deer?

SomeSoldier said:
Deer said, "catch me outside" “hold my beer and watch this...”
Click to expand...