I went to a gun show recently, and I purchased one of these grips. I intended to install it on my Ruger Precision. When I got home, I dug out the rifle and removed the grip. The new grip would not sit correctly because there is a diamond shaped protrusion on the receiver of the Ruger that acts as a 'stop' for the safety lever. No problem, a few minutes with the Dremel tool, and I created enough space in the new grip to clear. Assembly attempt #2 found that when tightened, the grip does not seat flat to the receiver. Inspection reveals that there is a ton of room between theangled inner portion of the grip and the angled portion of the receiver, so they do not mate up. Further inspection finds that the hole in the grip for tje attachment bolt is located in the wrong spot, about 1/8" off. Ok, so it won't work on this rifle...

Next, i tried to install it on an Armalite AR-10. Same exact problems as with the Ruger Precision.

Last attempt was on a AR-15. Again, the same problems as with the Ruger Precision.

I paid $ 26 for this grip. There were other vendors that were selling the exact same grip for $ 45 and $ 48. Although it feels pretty nice in your hand, it doesn't want to seat properly on the receiver of any AR type. If this POS had a manufacturer's name on it, I would be happy to tell them that it is indeed garbage. Sadly, it came in a clear plastic bag with a screw and an allen wrench. The only markings on it say " Made in USA" , and honestly, I question that claim. Save your money. Walk on by this if you see it. 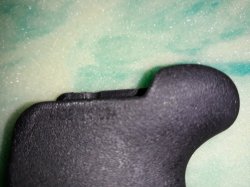 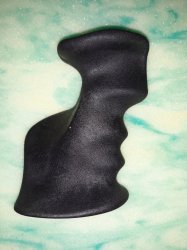 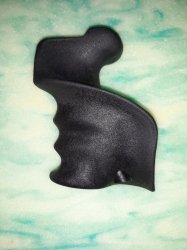 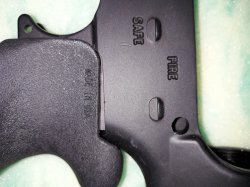 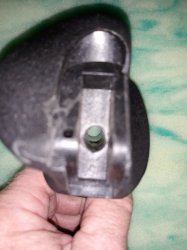 Not sure how the pictures got attached twice, but I am actually impressed that I figured out how to attach pictures, soooo.....

Update:
A goggle search reveals this as being manufactured by a company called J&E . I left them a long, very detailed description of the problems with their product. I don't expect they will do anything, but they have my contact information. My luck, they will take offense to the polite, but critical review, and they will "red flag" my ass !

Warning; They make other AR parts as well...no telling what kind of quality those have. I know that I won't be trying any of them.

Looks like you could dremel out the rear channel to make it fit and salvage your $28.

It looks a lot like the grip of the GRS Berserk stock: 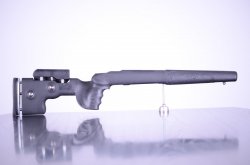 The grip is reportedly super comfy.

Podmonkey said:
Looks like you could dremel out the rear channel to make it fit and salvage your $28.
Click to expand...

He didn't read the fine print. This wasn't a completed grip, it was an 80% grip.

Podmonkey said:
Looks like you could dremel out the rear channel to make it fit and salvage your $28.
Click to expand...

It's not getting hung up there. The grip will properly slide into position, but because the hole for the attachment bolt is placed incorrectly and the two angled surfaces don't mate, the grip gets pulled out of place when you tighten the bolt.

I sent J&E Machine a very detailed email about it. I was polite, just describing the problem. Still waiting to hear from them. Not holding my breath.
O

Haha never saw that until
Now